An April Fool From My Past 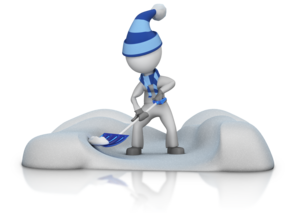 Schools rarely close unless it's really bad - or really unexpected - or both!

For years, my son and I played April Fool tricks on each other - usually along the line of trying to get the other to look at some imaginary object or some event that was not actually happening.

On April 1 of his year in Vermont, there was a 2 foot snow storm and school was canceled. I knew he would not be happy if he got up and took a shower only to find out he could have slept in - so I woke him around 5:30 AM to tell him there was no school due to a snow storm.

His reply was along the lines of "ha ha I know it's April Fool and I am not falling for that." I suggested he look out the window but as that had been our usual "fool" he refused. He got up and was heading for a shower and I tried most seriously to again tell him there was no school.

I forget how I managed to convince him to look out a window - but he did. And what he said is not for public consumption.

It was such a funny experience I recall it every April 1 !!

P.S. This is an edited repost form years ago.
Neither of us lives in New England anymore

What's your favorite April Fool memory?
Let us know below in the comments...thanks